The weather in the Boston area on Sunday, July 17, 1932 was warm, with a high of 86°F and moderate easterly winds, and it was time for a family outing.  Martin J. Conlon’s two sons with his late wife Elena (Fogarty), Bill (9) and Joe (6) could have some fun at the beach, and his new wife Ella (Fox) and their six-week-old newborn Martin could get some fresh air.  After church, Martin and Ella, along with Bill, Joe, Martin, aunt Mary (Lyons) Fitzgerald and family friend Annie Mahoney bundled into the car to drive out to Nantasket Beach.  It was to be a quiet day summer day together, away from the world’s troubles and triumphs.

Governor Roosevelt’s yacht had arrived in Brighton the day before and he was traveling to Portsmouth, New Hampshire to address a large crowd as the recently nominated Democratic candidate for President.  The bonus marchers were still in Washington, D.C. but with Congress adjourning were losing momentum.  The Olympic trials were underway and Clarence Crabbe was earning his moniker ‘Buster’ by demolishing swimming records.

Martin was a merchant who sold Atwater Kent radios and operated the Jenny Oil gasoline station in Whitman, home of Bostonian and Regal shoes.  After Elena died of breast cancer in 1927, her widowed aunt Mary had moved in to 9 Elm Place in Whitman to look after the boys.  Across the street were their grandmother Alice Lyons Fogarty, and aunts and uncles –Lena’s brother’s Bill and Patrick and sisters Mary and Alice.  Elena’s cousin Ella must have been a presence as well, so when Martin and Ella married in April 1931, it must have brought the Conlon and Fogarty families still closer together.

On the way home, as Bill recalled 70 years later:

“I was about nine years old then. He also had another son, my brother Eddie was born about 1932. And then that summer, we had an unfortunate auto accident. My father was driving and my stepmother was in the front seat. And I was in the backseat with my brother Joe and my half brother. Eddie was in the arms of a Great aunt.  My father was making the turns when a truck hit us in the side where my stepmother was sitting and she was killed. The rest of us were hospitalized for varying amounts of time. I was in for about four or five days and I had a concussion and a couple of cuts in the face. My father had a broken shoulder. So he was in for several weeks. And my brother Joe had I think he had about five dents in the skull right about here. So he was in hospital all summer long for about two months, maybe 10 weeks. But he, he finally recovered okay.”

According to the newspaper report, the injuries were severe, with 4 of the seven expected to die from the collision which occurred at about 6:30 p.m. on Main Street, near Green Street, with a vehicle operated by Patrolman Henry Wigmore of the Hingham Police. “The car was in head-on collision with [police officer] Wigmore’s machine, but Conlon, in his efforts to avoid the crash, stepped on the gas and swerved his machine so that it ran up on a small green near Green st, crashed against a pole and caromed against a large tree, throwing the seven occupants of the car on to the ground.”

Four of Eight Injured at Hingham May Die

The main route from Nantasket currently goes through a rotary in Hingham, but according to the Patriot Ledger, “construction of the rotary started in 1933,” the year after the accident, so the actual route taken that day is unknown.

Martin was charged with “operating a motor vehicle so as to endanger” and appeared in Hingham District Court that September. There are conflicts between the accounts from the newspaper, Bill’s recollection, and the scene

Perhaps court records still exist that could shed further light, but it seems possible that the Conlon vehicle turned left from Summer Street onto what is now Route 3A and into the path of the oncoming car.  Bill remembered going to court but thought that he hadn’t had to testify. 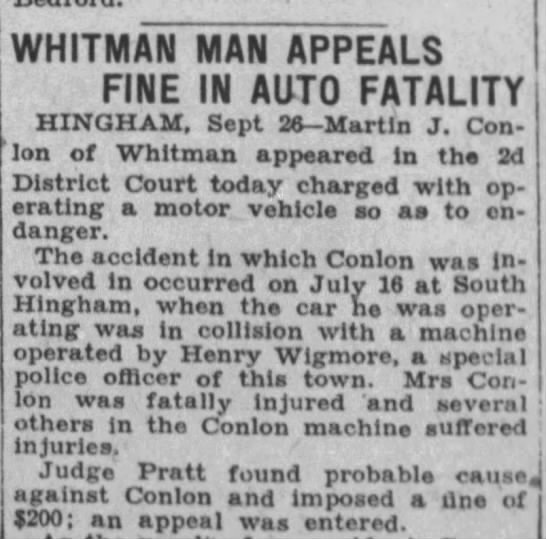 Ella died of her injuries on 20 July 1932, five months to the day after giving birth to her only child.  The others survived, and Martin’s sister Winifred Conlon McCarthy came down from Holliston with her two teenaged daughters, Mary and Rita, to look after the three boys for the rest of the summer.

After burying his second wife, Martin moved the family to 903 Washington Street, where they lived for another decade, before he bought the house next to the gas station and moved it to 31 Legion Parkway.